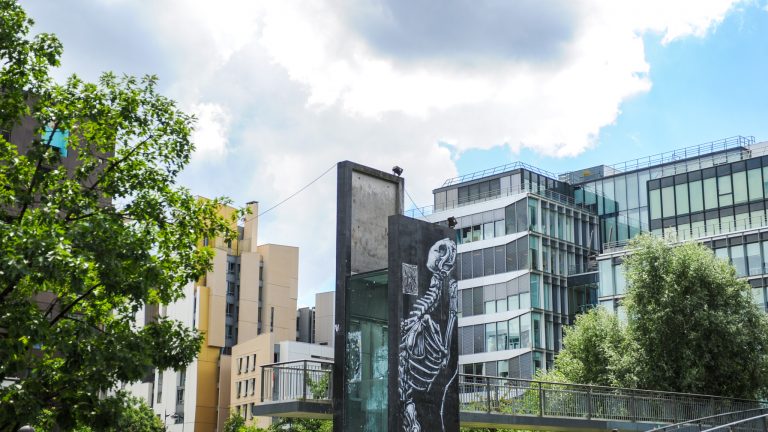 Finally, a second article! We let holidays go by and here we are again, even more motivated than before. 🙂
Speaking of parties, “A moveable feast”, does that ring a bell for you? It’s a book by Hemingway about his Paris of the 20’s, an artist’s city and life. I would like to tell you about my Paris today and the urban art we encounter there. Most of my Parisian life and my knowledge of this city can be found in the 13th arrondissement and more particularly in the Paris Rive Gauche district. In fact, I devoted my dissertation to this area by studying the link between street art and heritage.

The 13th is indeed well known for its street art. The large murals, a monumental and international project, are highly publicised but the rest of what is happenning here is less well known. How did street art become such a big part of the 13th’s identity? It is all of the projects, legal, monumental but also illegal, which gives meaning and all its charm to this district. This is the 13th I like to explore and talk about.

In this first article on this vast arrondissement, I’m going to tell you about one district in particular: Paris Rive Gauche. Bordered by the Seine, Austerlitz train station, Chevaleret street and the ring road, this industrial district was abandoned in the 1970s. Les Halles central market moved to Rungis, outside Paris; the Big Mills of Paris and the SNCF (national train company) refrigerated buildings among others fall into disuse until the 1990s. The buildings are in ruins and there are no houses around: the context is conducive to graffiti. They’re invading this abandonned site. Paris Rive Gauche obtained official status in 1991 as an urban development planning area, which means that it is an area under development.

It was here that the new François Mitterrand National Library, inaugurated in 1995, was built, as well as the new main campus of the University Paris 7 Paris Diderot, which moved in 2007. Every time I return to this neighbourhood after a few months’ absence, a new building is part of the landscape. The company that develops Paris Rive Gauche is the Société d’Etude, de Maîtrise d’Ouvrage et d’Aménagement de la Ville de Paris (SEMAPA), chaired by Jérôme Coumet, the mayor of the 13th arrondissement. He is very much in favour of street art, he loves this art and uses it in his cultural policies with his deputy for culture Catherine Weigel D’Angelo.

A large part of the district’s street art projects were born in this area. In 2010, a gallery owner moved to the rue Goscinny (the gallery has since moved to the bd du Général d’Armée Jean Simon). He is a professor of plastic arts who is embarking on the adventure of the art market. He opens his first gallery and chooses a not too expensive location: the brand new 13th district, far from the Marais where all the contemporary art galleries are clustered. Medhi Ben Cheikh with his gallery Itinerrance is fully dedicated to street art. It welcomes well-known artists, but also emerging artists. And to give everyone great visibility and create a large-scale project, he collaborates with the town hall and Jérôme Coumet to create large frescoes on the borough’s social buildings. He is one of the precursors of this urban art movement in Paris. He paved the way with monumental projects such as Tower 13, this exhibition in an abandoned building that was occupied by street artists before its destruction, which caused so much talk about it. This event in a way inaugurated the route of monumental frescoes on Boulevard Paris 13 on Boulevard Vincent Auriol, along line 6 of the metro, previously called Street Art 13.

Coming back to our Paris Rive Gauche sector, I’m going to tell you a bit more about the Masséna micro-district between Chevaleret street, Tolbiac street, the Seine and the ring road, where Paris Diderot University is located.

When the neighbourhood was rehabilitated in the 1990s, all graffiti disappeared (except at Les Frigos, the former SNCF refrigerated building, now converted into artists’ studios) to create a modern and immaculate neighbourhood with a very contemporary architectural style that stands out from the rest of Paris. Masséna is often the setting for films that seek a New York universe in Paris!

However, street art has gradually returned to the neighbourhood since 2010. The arrival of the Itinerrance galleries, then Le Lavomatik arts urbains, Mathgoth and more recently the GCA Gallery and Art&Craft, and the tolerance of the town hall towards vandalized street art played a big part in this. Artists have thus appropriated the new walls, admittedly through a much more institutional means than 50 years ago, but small works of vandal street art still proliferate there.

As the neighbourhood is still under construction today, some areas have remained hotspots of Parisian graffiti.

We are also close to the François Mitterrand station and the Austerlitz station where metro, RER and trains intersect, playgrounds for graffiti artists.

Beneath Général d’Armée Jean Simon street and the tramway, we find the future Paris – Ivry street, which is one of the key spaces of the Greater Paris urban planning project that aims to connect Paris and its suburbs. Under construction, it is completely invaded by the graffiti artists who work there day and night.

The major and oldest artwork in this area is the anamorphic mural by the duo of artists Zag & Sia : The 23rd Arcana or The King and his Fool, representing Jérôme Coumet (the mayor) and Medhi Ben Cheick (gallery owner of Itinerrance), both founders of the crazy project of an “open-air museum” in the 13th arrondissement, with the Boulevard Paris 13 project.

Moreover, this area is located just behind the Lavomatik – the stairs lead directly behind the gallery – which brings together many street artists and manages more or less officially the walls around it.
Don’t hesitate to ask them for informations about the artworks that intrigue you, Benoît and his colleagues are real resources!

Hundreds of French and international artists can be find in this neighbourhood, gravitating around the five street art galleries. Beyond the tolerance towards illegal street art, the new public buildings have many murals on their facades, authorized by the City Hall, the owners of the walls and supported by galleries or street art associations. For example, schools are very often decorated and artists have been able to deliver their vision of childhood:

The Groove Your World festival organized by the association Vis Ton Rêve (VTR) in 2016 took over the walls of Françoise Dolto’s nursery with three French artists: Doudou Style, Stoul and Jo Di Bona.

Stoul tries to represent a double reality, that of little girls who dream of one day being princesses and that of adult women who have become free and walk where they are not expected. While being inspired by the Japanese art of origami or the contemporary architecture of the district. Doudou Style takes the side of representing a young child in all its fragility. The two women have created a continuity between their two murals, like a dialogue about childhood. Jo Di Bona with his pop graffiti style, he also takes a vibrant portrait of a child.

In Goscinny street, on the wall of the Primo-Lévi primary school, the German duo Herakut represented by the Mathgoth gallery, have created a mural entitled “Magic exists” in the French colours. A poetic tribute to Paris after the attacks of 2015 in order to give back a little magic and hope to children firstly, but also to everyone with a visible message to all in the public space.

The skeleton mural by the Belgian artist ROA on the public elevator in front of the esplanade Pierre Vidal-Naquet and the University Paris 7 Diderot is a mural of the Boulevard Paris 13 route. It was painted in 2016 and is visible to all students, staff of the university and to the inhabitants of the neighbourhood. Yet, during my visits, many people who see it every day don’t know which animal this skeleton reflects… a little idea before giving up (or “giving your tongue to the cat” as we say in French)? The answer will be at the end of the article!

The historical rue Watt, known since the 1980s for its graffiti and posters of artists of the Frigos, is, despite its transformation, still home to several large murals and has many other small illegal artworks.

Bordalo II a Portuguese artist, created a mural in February 2019. At the time, the artist was presenting a large exhibition organized by Mathgoth. For the occasion, he painted two murals in situ in the neighborhood including this lemur in Watt Street. He’s an activist on the environmental and the animal causes. He creates his sculptures, the “Trash Animals” with plastic and waste objects, found in illegal dumps near the places of creation.

The multidisciplinary women’s collective Mission [pas] Impossible painted a large mural in 2017, asking for donations on the Kiss Kiss Bank Bank platform to obtain the necessary material. A new mural by Etnik has just covered it, supported by the GCA Gallery in December 2019.

On the street’s corners of the district, we very often find several of the same artists with their small artworks glued to the walls.

There’s the famous John Hamon and his self-portrait posters, which reach the zero degree of art as he likes to proclaim it. Or A2 the artist is in love with urban space and is an anarchist who glues to every street corner his wooden plates, anarchist symbols declined in heart, or portraits of renowned anarchists such as Louise Michel throughout Paris. There’s a whole bevy of them in our neighborhood.

Or Invader the sacred father of our “invaders” artists as I like to name them, with a mosaic of unusual proportions that pays homage to the public elevator on the Jean Antoine de Baïf Street with a Space Invader that takes off, although this elevator does not take off very often… Little joke of an urban artist?! You can also find a few other little Invaders in the neighbourhood… I won’t say any more, go to your apps!

There is also Cali O a newcomer to the neighborhood. A London artist who glues small robots in mosaics on the model of Invader, which he also follows during his few trips to Paris.
Another mosaicist, Mr Djoul who creates an alien invasion with his little aliens who surprise us all over Paris.
And Shadee K who started to draw in the Frigos and now sticks his cute pink teddy bears all over the neighborhood, sometimes showing their teeth a little bit…

And then there are the well-hidden birds of Gilbert Coqalane made of aluminum foil, perched at the top of the lampposts on Hélène Brion Street around Mathgoth Gallery that supports him. I hear there are other bestialus of all kinds in the neighborhood! Send us pictures of the ones you’ve spotted !

I hope that this article will have made you want to discover this neighborhood and of course, other articles are in progress concerning the 13th! And if you are interested in the architecture and urban planning projects of Paris Rive Gauche, do not hesitate to drop by the Maison des Projets de la SEMAPA on the quays in front of the Paris Val de Seine School of Architecture. Some small works are hidden there…

If you have a sudden passion for street art and want to go on a treasure hunt in Paris and elsewhere, we have written a special article to help you discover who is behind the artworks you will encounter on your strolls!

© all the pictures are by Invisible Walls 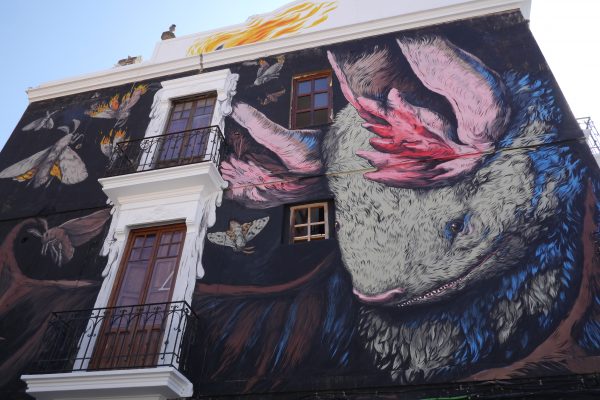