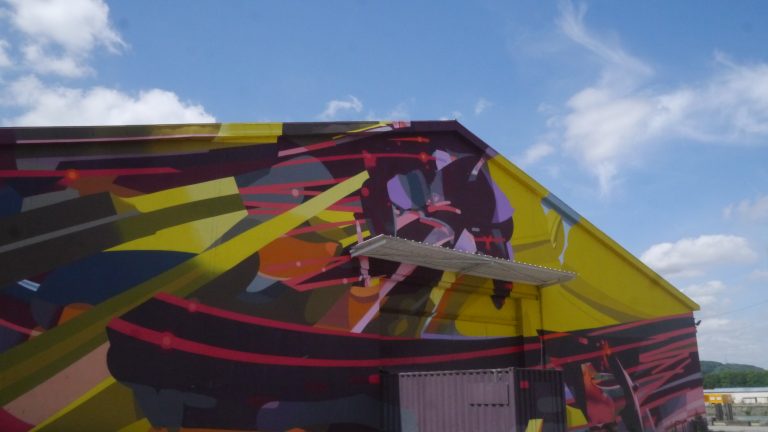 Rouen, the city of a hundred bell towers where I spent every summer of my childhood, is becoming an unavoidable street art destination in France. For the second edition of the festival “Rouen Impressionnée” I rediscovered this city and it impressed me!

Beyond its history and its vast cultural heritage that you should certainly not miss, I would like to present a non-exhaustive panorama of the urban art scene in Rouen through this festival, the local artist InkOj and the art centre, Hangar 107.

Just as it is happening in Rouen, more and more cities are adopting a cultural policy in favour of street art, which is seen as a local development lever. It is a new touristic phenomenon and many festivals are emerging in France. In short, street art contributes to embellishing the city and renewing its attractiveness. Indeed, it often participates in revalorising districts or territories that are marginalised compared to a centre, such as the 13th arrondissement in Paris, Vitry S/Seine or the Cabanyal in Valencia (ES).

The urban art festival ‘Rouen Impressionnée’, on the Left Bank

The urban planner Olivier Landes is the organiser of this large-scale event. Specialised in urban art, he is the founder of the association Art en Ville, within which he was also the curator of the In Situ festival in Aubervilliers.

For its second edition in 2020, ‘Rouen Impressionnée’ is taking over the Left Bank with about twenty artists programmed so you will need to cross the Seine from the city centre. At the time I was at the festival, 9 artists had already created their murals during the first part of the festival between June 23rd and July 17th.

I take this opportunity to tease you the second part of the festival which started on Monday 24th August. The artists will perform until September 25th. Among them I must mention Manolo Mesa and Elian Chali, who have been my personal highlights since I had the privilege of discovering their work in Valencia. However, a festival is above all an opportunity to make discoveries, sometimes moving ones! I present you in photographs a selection of 4 murals out of the 9 which were painted during the first part of the festival and which particularly captivated me.

In short, Rouen Impressionnée takes place from June 23rd to November 15th 2020. Two routes have been created in Saint-Sever and Grammont to allow you to easily find your way around the city without missing a drop of it!

Tip: the program is in two parts and depending on when you follow the routes, all the murals may not be completed (I got caught in this trap!).

Free tours can be booked here and dates for September and October are available. All the infos are on the website but I’m breaking the back of the work for you! 😉

The first edition of the festival was held in 2016 in three areas: the city centre, the quays and the Sapins district in the upper Rouen area. This geographical strategy is probably a result of the organisers’ desire to produce an event that is in the dynamic centre of the city, but also enhances the more distant neighbourhoods.

So I went to see some of the artworks from the previous edition! Here are a few pictures of them!

Some of them no longer exist, notably the Giant Squid of Brusk, whose support building was demolished in 2017. And I didn’t have the time to go to the Sapins district, but I hope to get an opportunity soon.

To fully understand the relationship between the city and street art, I went outside of the festival setting to immerse myself in the vandal scene. Close to the shopping streets, the Place Saint-Marc is a more peaceful part of the city centre. I immediately noticed there a piece by the artist InkOj whose work seemed to be particularly symbolic.

Since December 2019, he has been stenciling and spraying the entrances of buildings in Saint-Marc district. The motifs resemble those of Portuguese and Spanish azulejos. Beyond this style that I like very much, it is his territorial approach that deeply appeals to me. Indeed, the profusion of works in the district’s perimeter enhances the streets, pavements and the entrances to buildings. It is renewing the entire urban aesthetic. Moreover, the location of his murals no longer invites the passer-by to raise his eyes to what surrounds him, but rather to look beneath his feet! By the way, when you look at the streets to discover the street art that is hidden, you will often find little wonders by lowering your eyes 😉

This project is a personal, spontaneous and vandalous initiative of the artist, which he finances himself and enjoys total freedom. Rouen’s town hall apparently adopts a posture of tolerance, as it is becoming more and more common in many French cities nowadays.

Urban art is truly a vehicle for cultural identity and social cohesion. It can act as an image or ambassador for a district. I have experienced this on several occasions through unexpected encounters (cf. my excursion to the Cabanyal). While photographing works of art, I was approached by the manager of the Café de l’Époque, 43 rue Armand Carrel. It’s beautiful to see that pride and enthusiasm mingle in these conversations in which urban art becomes a natural pretext to discuss the neighbourhood and its aura. It’s him who pointed out to me that the designs in InkOj’s works were a continuation of the tiles inside the buildings entrances which are closed most of the time. This is nonetheless visible in front of cafés where we can publicly enter during the day.

I then invite you to cross Eau de Robec street, where you will be charmed by the city and its half-timbered houses. This street has also been transformed by the artist InkOj, following a group order from restaurants.

The artworks of InkOj bring a hidden architectural heritage back into the open: the traditional concrete or ceramic tiles of Rouen’s interiors. From the private space, they now extend out onto the street, into the public space of the city thanks to his practice of contemporary and urban art!

Hangar 107 is a must-see for urban art lovers. I think their program is excellent and I loved this summer’s group exhibition. It brought together all the artists who had been exhibited at the Hangar since its opening in 2018. Among them, I would mention a few of my favourites: Tania Mouraud, Tilt and Thomas Canto.

The next exhibition will showcase the work of Olivier Kosta-Théfaine and will be open from 24 September to 31 December 2020.

Hangar 107 is located on the docks, a more modern and industrial area in contrast with the architecture of the city centre. The art centre’s setting is luminous thanks to the bay windows that give a beautiful view of the right bank. I also invite you to cross the Flaubert Lift Bridge to stop under its huge concrete pillars and admire the Seine.

To conclude, here is a surprising work with a 3D effect by the artist Jaw created last June. It was commissioned by the Rouen Normandy Metropolis to enhance Vergetiers street. A short walk from the Gros Horloge, it is located in the heart of a very lively area. The aim was to give this pedestrian street with very little traffic a new look. This project reflects perfectly the appeal of street art in the strategies of urban planning.

© all pictures are by Invisible Walls.

Instagram page  of Olivier Landes, curator of the festival 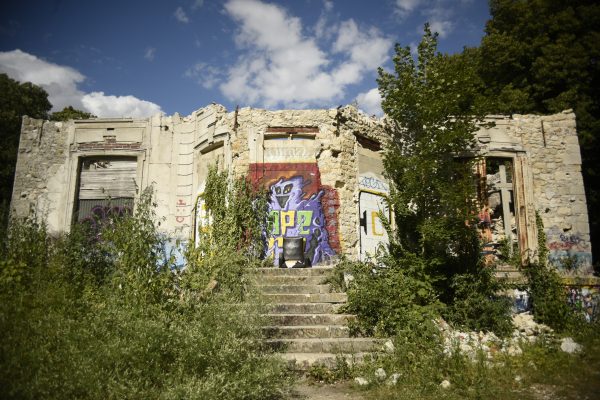 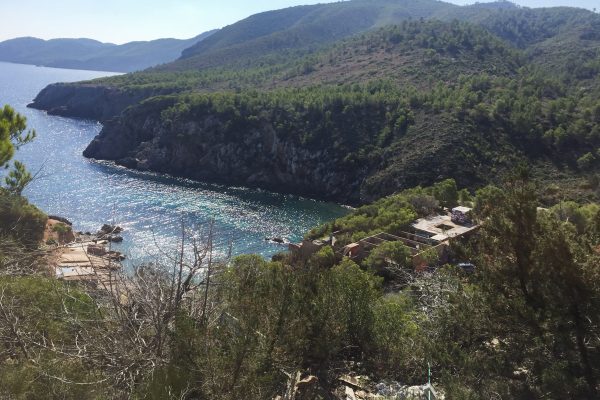 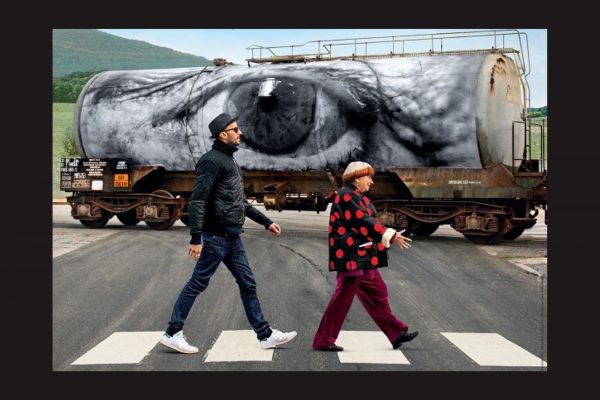 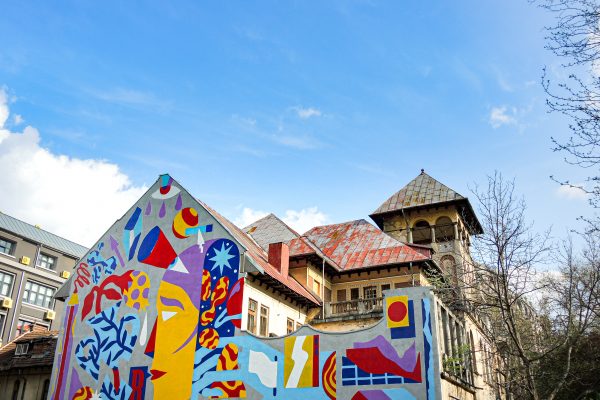